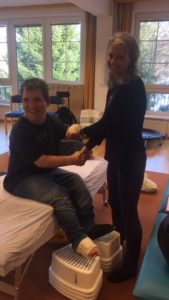 The last months have been extremely full for our team, and there is so much to write about, but before I start to add all the half written posts that are waiting to be published, our last story of the season must be told.

This evening when we were ready to hold the last ABR Assessment for 2017 the Team was very tired after many weeks of holding courses back to back – and in no case were we ready for such an amazing surprise. A 25 year old young man from Austria named Christian  and who started with ABR in March 2017 drove his wheel chair through the door to our seminar room in Reichenau a. d. Rax.

We knew Christian as a generally very fused and stiff young man with only minimal independent movements and bodily mobility. He can drive his own wheel chair by employing a joystick and can talk, but it was very difficult to understand him. He is however a very engaged young person and works in an organisation that promotes the interests of handicapped people in Austria.

When he entered the room, it was clear that an enormous development had occurred. One could see that his face was much more relaxed and his eyes sparkled with excitement.

Before we could even sit down together, he and his parents began to tell about all the changes he had made in the last few months since we last met in June 2017. The list was long – we took an hour to gather all of it and they were not finished telling the story. But a good portion of it is below:

– Hand usage – he now stretches ou this arm and grasps the hand when he “shakes” hands – not only offering a stiff unmoveable hand at a close range to his body.
– He now easily drinks out of a big glass and does not spill anything
– He opens bottles alone and can drink from a bottle.
– Independent eating.
– There is a very difficult clasp that he has learnt how to open.
– At work, he sets the table.
– At his workplace, they often give him more complex tasks to do on his own.
– They now send him shopping at work, and he goes alone and seeks independence
– He can use the ATM machine for getting cash on his own.
– He is extremely motivated and now wants to do everything himself. Refuses help even when it takes much longer to do things his way!
– Takes off his jacket and can put it on.  More independence when dressing.
– Has learned to open and close zippers.
– Shaves, washes and brushes his teeth alone.
– He figured out himself how to propel his wheel chair alone manually – not using the joystick. Then he figured out how to use his upper body and not only the arms alone so that each push propels him much further along.
– He can now walk with his walker without assistance – slowly albeit but never the less!
– It is much easier for him to read.
– His speech is not only much clearer and easy to understand, but he uses more words and composes more complex sentences.
– His facial mimics expression has expanded and blossomed.
– He can now lie relaxed on his front – it was not possible for him to be on his front before due to stiffness.
– Put all fingers together in front of his body.
– Fold the hands together easily.
– He can sit on his own without support.
– He can play with a ball and do other activities when sitting freely. 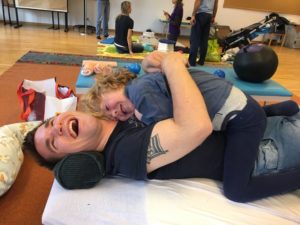 And a big hug with Johannes was also possible!

At the Assessment we could also observe that his body was beginning to become much softer and less stiff. In addition one could see:

The parents commented that before they started with ABR, he had not improved in any function in years and that it is also the expectation for severe young people with cerebral palsy like himself, that he would simply get worse with age and time. They are also very surprised how much he has changed.

This does not mean that there is not a great deal that can still be achieved or needs to be worked on with ABR Applications, but it is wonderful to see that a 25 year old young man with a level IV Cerebral Palsy can make such fantastic improvements in the ABR program in such a short time span.

Thank you Christian for letting us share your story!