Today I received the following question from an mother in Finland in respect to a post she had read from Tom Myers. His post is below: 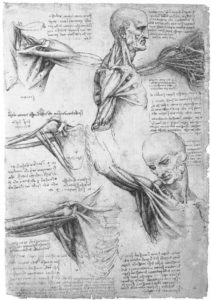 (The picture included from the original post obviously shows muscles which have been thoroughly  “cleaned” of the fascia and connective tissue structures which are the architectural and stabilising structures.  D.V.)

The question from the mother is:

Hello S.– Thank you for this question!  Yes, ABR is able to address all three types of movements described above by Tom Myers because the ABR applications achieve their positive effects by initiating a step by step reconstruction of the bodies intrinsic Biotensegral base of stability. Through building and/or rebuilding or improving the intrinsic architecture of the body – which is of course also “Embryonic” in nature due to the fact that the internal mesenchyme related tissues first appeared during our embryonic development – this then allows for and improves the other three types of movement described above. On the other hand, when the body is without or is lacking in a sufficiently intrinsically stable architecture, then those three characteristics of movements described by Tom Myers are impaired. The body cannot sufficiently exist in a spatial dimension, it collapses either fully or partially and this internal weakening or collapse effects the three described movements.

1. “Embryonic Movement” is impaired because the “spaces” necessary for the flows of fluids or for the movements of cells does not exist sufficiently. The fluids cannot penetrate and infiltrate the tissues in a manner that would keep the tissues adequately healthy and thriving. The tissues of the body begin to “fall in upon themselves”. They become “stiff”, fibrotic, dense, under nourished – in the end – we can redefine the meaning of “spasticity” simply by understanding what occurs when the movements of the fluids in the tissues is impaired! Contractions and distortions of joints are the obvious long term result of insufficient Embryonic Movement quality.
In the case of a brain injured child, even if the brain would be in good enough shape to actually maintain the health of the tissues once it is there, the body simply cannot achieve enough momentum to penetrate tissue areas of the body that have been partially shut down from the fluid flow.
This is one of the main effects of ABR applications: Restoration of the flows of liquids within the tissues which in itself has a tissue remodelling effect which works to release spasticity, strengthen weak joint capsules, and attain the next level of improvement of architectural stability.
2. “Intrinsic Movement” – Tom Myers describes intrinsic movement here as the movement of the smooth muscles. From the very early days of ABR – this has been a central goal of the techniques: To improve the quality of the smooth muscles of the lungs and the other internal organs. Palpitations of especially severe children reveal how “empty” the volumes of these children are internally. One can often grasp the vertebral column through the abdominal wall! This is a sign of extreme depletion of the internal organs. They are also “dried out”, under developed and functioning at a very low level. ABR would not have such a good success in helping these individuals, if it were not for the fact that one is able with the various abdominal and thoracic techniques to raise the functional level as well as the tissue quality level of the smooth muscles! It is through these effects that we consistently see reduction of mucus, colds and pneumonias, improved respiratory capacity, improvement of reflux and constipation issues, – the list is long. This brings the children a much higher level of life functioning which also in turn boosts the fluid movements described in #1 above. The body is a highly interwoven system! If one can achieve improvements of #1 or #2 then these improvements are immediately systemic in nature and bring all the surprising effects of improved concentration, attention, awareness, which also emerge with the application of ABR.
3. “Extrinsic Movement” – This Tom Myers describes as our voluntary movements. Of course, this is what all parents want to achieve and how the parents base their evaluation of whether ABR “works” or not. “Has my child achieved a better functional level with respect to either sitting, rolling, crawling, standing or walking. It is however obvious that without achieving improvements in #1 and #2 above, there will be either severe or less severe limitations to what can be achieved by the child in respect to his voluntary movements. It is therefore that ABR concentrates on #1 and #2 above in order to achieve the improvements in the Extrinsic Movements. And it is also therefore that parents need to understand the sequences and the connections between the deeper lying weaknesses of their children and the emerging functional levels of the Gross Motor Function. When the flow of the fluids to the tissues is inssuficinet, then the result is that the tissues become dried out or too dense. This becomes then a negative cycle with either larger or smaller areas of the body that cannot be sufficiently penetrated by the fluid exhcange system! Improvement of the flow, the improves the tissue remodeling. Improved quality of the tissues, improves the level at which the child can then utilize the body for the extrinsic movements. With ABR Patience and Time is necessary in order to attain the desired improvements, but these improvements can be achieved when the tenacity is present!
In the last years ABR has developed an enormous selection of applications all which directly promote the quality of the extrinsic movement level. These include the wraps, the osteo-tapping and also the PAVE (Peri-Articular Visco Elastic) applications which have been showing great effects for many years.

Yes – we enthusiastically confirm – there is a dynamic interconnectivity between #1. #2, and #3 described above which the ABR Method seeks to promote with as many techniques and accompanying suggestions as is possible. I look forwards to any discussion or further questions about the above from the families!